The magical sightseeing in via Piccolomini 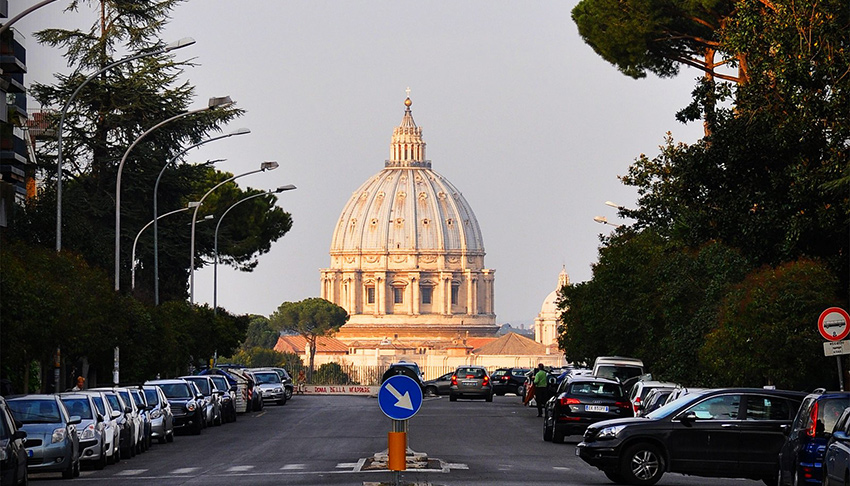 A unique place to observe the Dome of St. Peter
Via Niccolò Piccolomini is a street near Via Gregorio VII: as soon as you arrive from Largo Cardinal Ferrata, you are immediately amazed by a terrace on the bottom with a fascinating view of the Dome of San Pietro.

While approaching, however, naturally attracted by the grand monument, instead of becoming larger, it tends to resize and move away. On the contrary, it regains his dimension as soon as we return to the starting point, at the beginning of the street.

This optical effect, more enjoyable along the road in the car at a speed of about 20km/h, is not very obvious and, even today, remains unknown to most people and it continues to amaze anyone who wants to enjoy a breathtaking view, especially with the colours of the sunset and the romantic lights of the evening. Via Piccolomini is perfectly aligned with the Dome of San Pietro that appears exactly in the middle of the terrace; probably, since the other elements are less captivating and quite homogeneous, the human eye tends to make the monument the main character of the magical sightseeing and contextualize what it sees at a later time, as soon as it approaches the terrace again which adjusts the right proportion to all the elements.

This is just one of the many explanations proposed to describe the phenomenon: in reality, the real reason still is unclear and the illusion continues to attract critics and curious visitors.