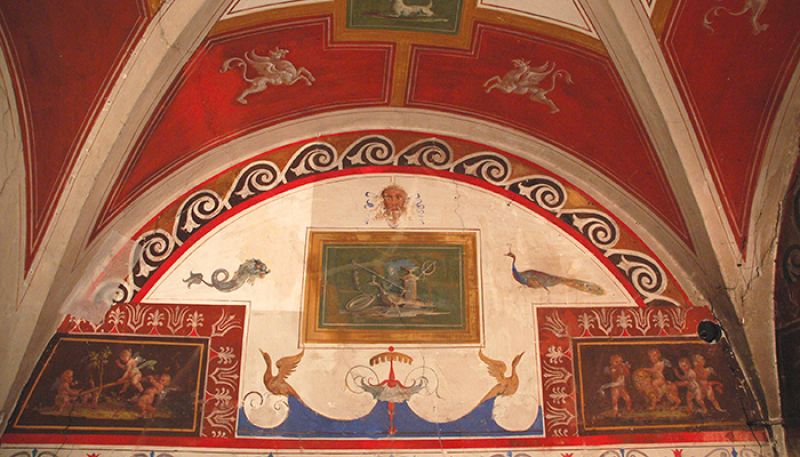 After the recent restoration, another area of the prestigious headquarters of the Accademia Nazionale dei Lincei opens: Villa Farnesina, the jewel of the Italian Renaissance.

In the early sixteenth century it was a simple staircase landing that went down to the kitchens of Agostino Chigi, transformed during the nineteenth century into an anteroom decorated in Pompeian style thanks to the restoration done by the former Spanish ambassador of Francis II Bourbon, the Duke of Ripalta, Salvador Bermúdez de Castro. In the thirties of the twentieth century, Guglielmo Marconi transformed it into a service environment for the Presidency of the Royal Academy of Italy.
The Pompeian room in Villa Farnesina, home to the Accademia Nazionale dei Lincei, is characterized by nineteenth-century decorations of extraordinary beauty, inspired by those ancient models that after the excavations of Herculaneum and Pompeii, thrilled the nobility and the bourgeoisie of the nineteenth century.
Today it is open to the public after the recent restoration by the Accademia Nazionale dei Lincei in agreement with the Istituto Superiore per la Conservazione ed il Restauro (ISCR); a further step towards a new and wider use of the entire venue, a jewel of the Italian Renaissance, one of the most prestigious artistic complexes in the capital.