A walk full of memories 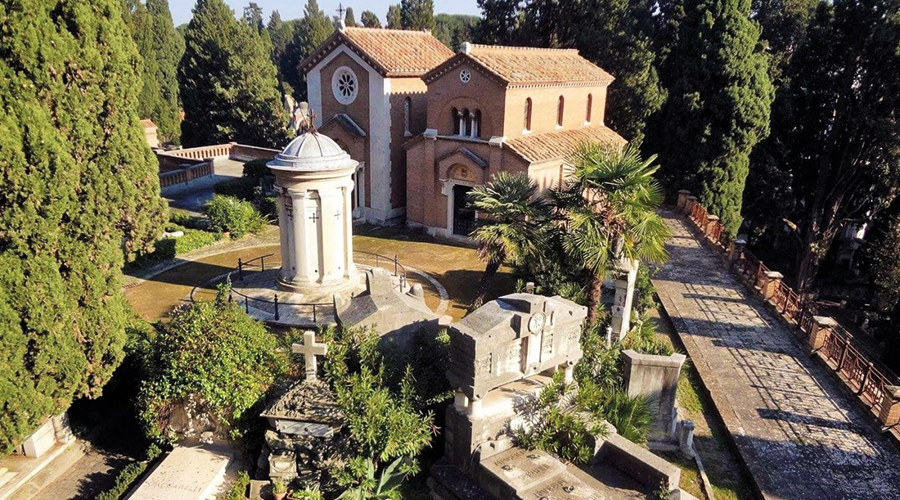 A full programme of guided and thematic tours allows citizens and tourists to discover the rich historical, cultural, artistic and architectural heritage contained within the monumental cemetery of the Capital, the Verano, located in the Tiburtino district and adjacent to the ‘Basilica di San Lorenzo fuori le mura’.

The Capitoline cemetery owes its name to the ancient Verani field (Agro Verano), ‘gens senatoria’ at the time of the Roman Republic. The area has always been a place of burial: the project, designed by Giuseppe Valadier between 1807 and 1812, was launched during the Napoleonic Kingdom and after the Edict of Saint Cloud, which imposed burials outside the city walls. Thus, even after Napoleon’s abdication, Verano officially remained the first cemetery in Rome. The importance of the place for the citizens is also demonstrated by the presence, up until 1879, of a horse-drawn tramway on the square in front of the monumental entrance that connected the area directly to the Termini station. The Verano is not only an extraordinary open-air museum but also a book of memories: the programme “Una passegiata tra i ricordi” with its eleven thematic routes, allows visitors to walk along the avenues, visit monumental tombs of famous people and to retrace the history of those who made Italy and its Unit, who contributed to the wealth of the 19th and 20th century literature and to the uniqueness of the arts in the last century, who determined the image of the city and the deepest soul of Rome, eternal in poetry and in the movies.